Report On Welcome and Orientation for the – 36th Batch

MSU had drawn a new proposal to carry out a welcome and orientation programme and it was approved by the faculty board at its 291st meeting. The programme included the events in the first day of newcomers at the faculty, six sessions of games and aesthetic events and Visits and lectures by MSU.

This year, 129 students from various parts of Sri Lanka entered into the Faculty of Medicine, Jaffna. They came from varied traditional, cultural, religious and linguistic backgrounds.

Hence, with a positive approach to reach out the newcomers, the MSU had drawn a new proposal to carry out a welcome and orientation programme and it was approved by the faculty board at its 291st meeting. The programme included the events in the first day of newcomers at the faculty, six sessions of games and aesthetic events and Visits and lectures by MSU.

The programme was a planned and closely monitored interactive programme, where newcomers were able to get to know each other and their seniors and engaged them in group works and to socialize.

The senior students were informed of the University Grants Commission Circular No. 919 – “Guidelines to be introduced to curb the menace of ragging in the Universities or Higher Educational Institutes (HEls)” and “Prohibition of Ragging and other Forms of Violence in Educational Institutions Act (No.20 of 1998) where the MSU abide with the policy of “Zero tolerance” towards ragging.

According to our proposal academic staff members and MSU members were present during each session to ensure the smooth running of the sessions. The feedback we received from them on our request has been attached with this report.

A welcome committee was formed including eight members of the 34th batch while including four students from other batches (33rd and 35th). The office bearers were selected at a batch meeting and approval was given by the President/MSU, senior treasurer/MSU, Student’s councilor/Faculty of medicine and Dean/Medicine.

On 3rd February 2014, first day of freshers’ arrival, a meeting was organized by the office of the dean for the new students and their parents, where the addresses were delivered by key persons and by the MSU president. Same time the relatives and friends of students were entertained with presentations about faculty functions, student life, batch trips, etc which was organized by the MSU at the ground floor with the help of administration. The MSU members were present there and had discussions with the relatives and friends of the students.

Six sessions were scattered throughout the first two weeks of introductory period including games and aesthetic sessions. Those sessions were held on the dates motioned below:

During each session academic staff members and MSU members were present there to ensure the smooth running of that session. A points system was used for each sessions and the winners and best performer of each session were selected and they were awarded in the welcome party.

1st session was conducted on the 3rd day of the new comers in the conference hall and the students were divided into four groups evenly distributed students based on ethnicity and sex as much as possible. Each group included 31 new students and 9 senior students from 35th batch, the immediate seniors. Each group had their own leader. The groups were asked to make their own cheers, flags, come up with a name and practice for the performances.

According to that names made were “vadai pochu” for 1st group, “we are fake” for 2nd group, “kaattupoochi & Co” for 3rd group; “irritating idiots” for 4th group and the colours of those groups were yellow, red, green and blue respectively.

The very first event was “name game”. For that one person from each group was participated and the winner was Mr. James Charles Camilas from “We are fake”. For other events places were given as follows. 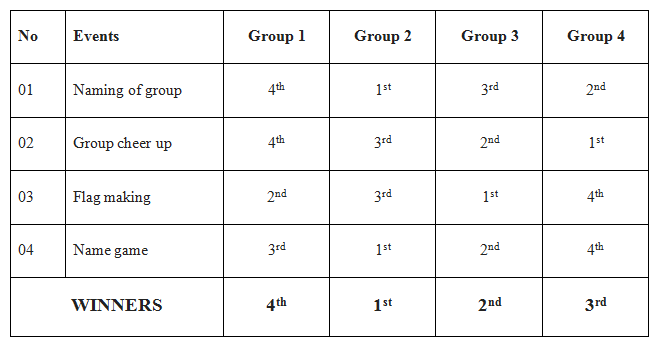 Finally the winner’s of first session was group 2 “we are fake”. Another event was introduced as signature hunt. For that booklets were given to all students and they had to collect as many senior’s signatures until their welcome party. For every 100 signatures they collected they were given a medal in the welcome party.

The second session was the sports event held in the faculty playground. Havana game was conducted including participants from all four groups. Clear instructions were given to all of the students before stating the game.

From each group two girls were selected by the group leader and they prepared refreshments for others in their group. All the ingredients, buckets and cups were given by the committee.

Finally the places achieved were as follows, 1st place for group 4, 2nd place for group 2 and group 3 and 4th place was for 1st group. And the winner of the day was group 4 – “irritating idiots”.

All the juniors enjoyed the game a lot. They had a big competition among them. They brought their flags and waved them and they shouted their group cheers in chorus. It was a colorful day really.

Third session was a talent show which was conducted in the lecture hall. 4 different types of events were performed from each group. Varieties of programmes were done such as songs, mimicry, dance, drama, instrumental play, etc.

All the seniors were allowed to see and enjoy this session and they were seated behind the juniors. The lecturers who came for the supervision were given marks for the performance and selected the best performer.

The feedbacks given by the lecturers were very impressive and they told they enjoyed the events. The seniors also enjoyed the performances and encouraged the freshers with their claps. This talent show helped to expose the talents of the juniors in different ways.

During the fourth session intra group debates were conducted selecting 4 members from their own group. The topics for the debates were given in the previous session. The judges for this debate were from 33rd batch who participate in the debate competitions representing 33rd batch. This session was held in the conference hall of our faculty.

All four debates had a very tough competition among them and all enjoyed the talks of the debaters. This was a best opportunity to expose their talking ability and the performances were amazing. Boys and girls, both performed well. Finally 1st, 2nd, 3rd, 4th places were given to group 4, 1, 3 and 2 respectively. The best debater was Miss. Dirupa Naveratnarajah from “Kaatuuupoochi & Co”

Fifth session was role play which was conducted in the conference hall. Students were seated. For this session marks were not given for the groups as the participants were randomly selected and difficult to give marks as group wise. Only the best performer was selected.  A musical box containing written commands was circulated and participants selected when the music stops.

The commands were light hearted and were planned not to hurt anyone physically or mentally. Some examples of the commands given there: sing a nursery rhyme, act like cooking rice and curry, act like a film director, talk like a politician in an election meeting, etc.

Finally Miss. Abiramy Kuganathan from “Kaattupooch & Co” was selected as best performer for acting likes a film director. All the performances were interesting and all the participants performed their best. This was a programme which exposed the different and quick thinking ways and performing in a given period of time.

Umpires for these matches were from 33rd batch who play in the cricket team representing 33rd batch. All the groups brought their flags and cheered the players.

The winners were group 2 and 3. Man of the match award was given to Mr. Muzammil Mohamed Infas from “We are fake”. This gave a good chance for the new comers to show their sports talent and all others enjoyed and cheered the players. Refreshments were given for the players and others which was made by the girls from the freshers.

A welcome party was conducted right at the end of two weeks on 16th February 2014 by a separate committee comprised of students from the immediate senior batch (35th batch). The winning groups of each session, best former of each session, 8 new comers who got more than 100 signatures of seniors were awarded. They were:

The overall champion of these sessions was “we are fake”.

The following lectures and visits have been coved on the dates scheduled by the pre-clinical coordinator.

This year, the expenditure for the activities was covered using the fund allocated under the HETC project particularly for the orientation of new batches. The Fund enables to utilize a sum of 12 500 LKR per batch/year.  According to the Terms of Reference of HETC orientation programme, this year the usable amount was the allocation of two year/batches (35th& 36th batches).  The budget has been submitted to the project Coordinator – Dr. (Miss.) S.Ambikaipakan.

As for the commitment by MSU on prohibition of ragging, MSU was able to ensure no incident of ragging thought-out the session and visits. But there were some incidents where unhealthy practices have been observed and reported by staff during the time before morning lectures started.

Hence, with the understanding of students’ limitation on total prevention of ragging, it is recommended seek staff’s help in addressing this issue.

This programme was of fruitful and this initiative shall be continued in a more effective way in coming years.

We, the MSU express our deep sense of gratitude to our Dean, the Senior treasurer, Prof. K. Sivapalan and all the members of the faculty board for their guidance and approving the proposal on ”welcome and orientation for the newcomers”.

All birds find shelter during a rain. But the eagle avoids rain by flying above the clouds. Problems are common, but attitude makes the difference!